COVID 19: Computer not up to date?

COVID 19: Computer not up to date?

Computers are a great part of our lives. It has gotten more attention during this COVID 19 pandemic. Many companies have deployed a work from home requirement and workers are forced to use more computers to continue working. Many users are scraping their storage in hopes to revive an old desktop or laptop to use. But when doing so, it is necessary to understand if the computer is on par or up to date.

Most would have assumed operating systems are compatible across devices and should be able to constantly upgrade. As Windows 10 announced limited support for 32 bit devices, this means limited support for any devices which are unable to use 64 bit systems. This can mean CPU that’s up to year 2015 are affected. As Windows support both 32-bit and 64-bit systems for both laptop and desktop, they are not easy to identify which system it is on. The only possible method to identify without digging the hardware is to power on and go into Systems to check. 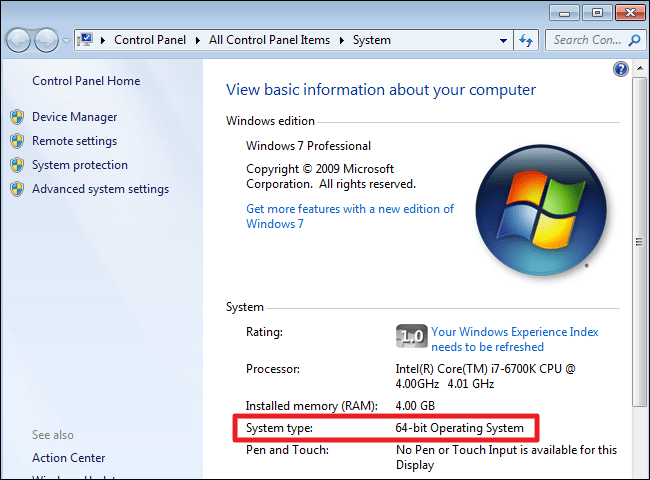 The age of Windows Vista and Windows 7 were loved by many users in the past. When Windows 8 arrived, not many users were willing to make that jump to upgrade. Countless users held on to the same operating system although Microsoft pushed a free upgrade even for non-genuine license users. Does that mean it is a bad operating system if is is listed on our list? Not entirely. There are security flaws that have emerged since Microsoft stopped the support for Windows 7 since January 2020. This also means computers who are using these 2 operating systems are more prone to cyber attacks than Windows 8 or Windows 10. However, the true issue lies with hardware. If you are still using the operating system, this means likely you have not replaced your hard drive since then. Which means your hard drive is prone to failure and corruptions. As experienced countless times, even after a replacement of computer parts, the hard drive is unable to withstand and eventually give way. The hard drive will have to be replaced and with that, data and software are affected. Operating system compatibility and keeping you safe is the priority for hardware changes. So, during repairs or upgrades, if you are using Windows Vista or Windows 7, no matter what computer parts are faulty, you will likely have to take into account that your hard drive will have to be replaced as well.

The year 2007 was a good year for consumers and many computer retailers. It was the first release for consumer SSD to be on the market. However, the trend did not kick off until year 2013. Users who were using SSD before 2013, had a different architecture than users with SSD after 2013. Even though you may be using an SSD, you are still prone to failure if the SSD was manufactured before 2013 or SLC(Single Bit Cell chips). For users who are using the same SSD as before, will likely encounter the same issue as well. Chances of the SSD replacement is fairly high even though that may not be the computer part that was faulty in the first place. Depending on the physical size(form factor) of the SSD, the replacement of SSD may not be possible. Some are even soldered on the motherboard and unable to replace, upgrade or extract data. This puts your computer at risk or increases the total cost for repair or in some cases, unable to repair as it is no longer on the market.   For a quote, do SMS or Whatsapp us at Budget PC Upgrade & Repairs. Let us know your Windows laptop model number or Macbook model and we’ll give you a quote! Alternatively, you may send it down to our shop for a free diagnostic test to find out the reason why your laptop is faulty.